Are you a "Unicorn"?

How to play someone else's game.

We all sat down to play Sky and Jenna Fernandes's "The Next Big Thing", which they created and had just gotten into Walmart – and had a blast. It's fascinating to me to see other people trying to live their dreams, and what forms those dreams take, the "instructions", and how they define and quantify success. BTW, "The Unicorn" is the overall winner, and all I'll say is it wasn't Ray.

We're going to shake things up a bit here this week and try to get serious and deep, and actually put out a post that's erudite and important. No, of course we didn't write it – we called in the intellectual cavalry for that. 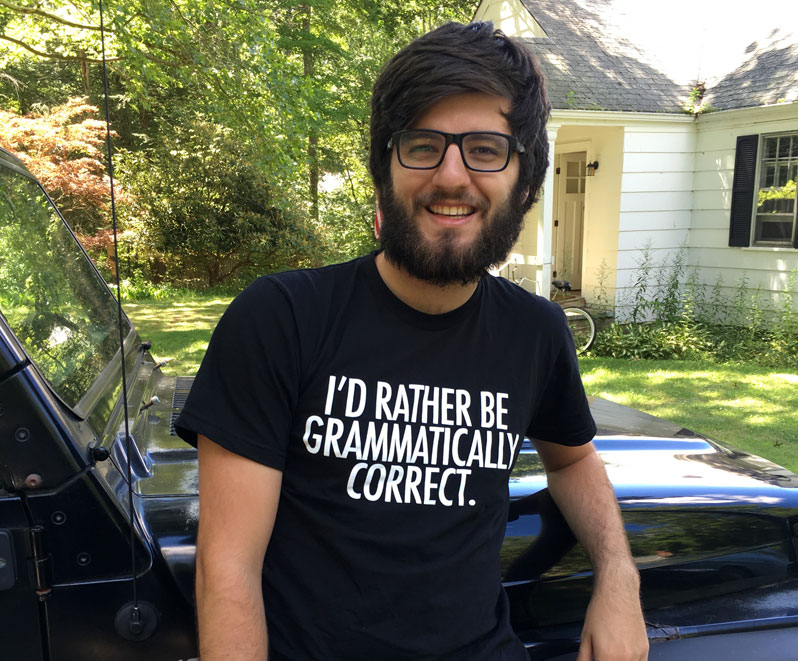 Seriously, this is a guest blog post by Old’s Cool friend and One Up! aficionado Christian Schmidt, who we first met way back when he was in middle school – he wrote us a long and passionate email about why he and his friends loved the game so much, and then asked a couple of questions we quite honestly almost couldn't answer.

Fast forward 6 or 7 years or so: he came to "meet the creator" and stayed for a few days. He taught us several lessons in humility – you hardly cannot imagine how smart and quick this man is, especially when it comes to stealing words, or having opinions, based on facts and historical context and perspective. Um, we’ve decided we're just going to be happy dumb from now on.

Although we normally stay away from politics, we think there’s a lot of interestingness here – this article originally appeared at theodysseyonline.com on July 4th, 2016 – but we think it’s just as relevant, and in some circles irreverent and painful today as ever, if not more so.

American Spirit: Made In Britain

In the wake of Brexit, looking Election Day in the eye, on Independence Day, we have to remember what made this country worth it in the first place.

There are two ways to kill a government.

Well, technically there's only one, since they both amount to the same thing.

All you have to do is to kill a government's legitimacy, and the concept of government collapses. The government itself might stick around for a little bit, as we see in North Korea, which essentially operates a slave state. In other words, once the government collapses, you might be left with its exoskeleton -- a spidery, cracking shell of what it used to house, still gruesomely creaking through its tasks as if in a sick sort of rigor mortis.There are two ways to actually go about slaughtering that legitimacy, though. Both are suicidal. Both are the recognition of corruption.

But only one is accidental.

Before we proceed, let's explain that word -- because it doesn't necessarily mean what it normally does. There's two types of corruption -- the first is the traditional version, in which the political elite decide that the common folk that have elevated them to their position on high, whether that position's a president, or a prime minister, or a king -- in which they've decided the common folk aren't worth honest consideration, not deserving of respect, good only for being manipulated into preserving the status quo. That sort of corruption, once exposed, raises hackles and ignites a vicious fury in those suffering beneath the regime, no matter its type. It's the illegal sort, the sort lauded by conspiracy theorists. It's the Thought Police. 1984. When it finally burns, it burns fast and hot, Arab Spring style.

Then there's the other kind. The kind that brings bad memories of a computer session gone awry. Click. Click. Click. "File corrupted." That's the other kind -- resulting in the deep sigh of an exasperated mouse-user. Or, in the case of government -- an exasperated citizen -- sick of it just not working anymore. The corruptive slight was malevolent -- it was procedural. Fated. The result of bad planning; systematic corruption has no triumph in store -- it's a failure for all involved. The only path forward is to learn from the mistakes and try it again.

Remember those two -- systematic and ethical -- they'll come up again.

For now, we've just got to remember that both systematic and ethical corruption can be very real, and aren't necessarily uncommon. Human rights violations in Syria forced massive amounts of people to scream, "Ethical corruption!" and fight for themselves. Detroit reels under the steady blows of systematic corruption -- no frantic clicking of a mouse can save it from itself.

Neither, however, are the actual knife in the heart of the government ideal that keeps the bureaucracy alive. Unseen, or, more aptly, unrecognized, both types of corruption can trundle along their merry ways, keeping the long-suffering people suffering. But the moment it becomes insufferable, the simmer rises to a seething boil, and the people start standing up.

Protest, assembly -- the press goes wild. Is there initiative within the bureaucracy to fix the government in a systematic collapse? How about revise their world views -- realize their error in an ethical breakdown?  Nope? Alright -- campaigns, civil suits, referenda -- the judicial system (if it's there) is activated in reverse. Should it fail to turn -- bankruptcy, riots, chaos. The assemblies go underground, the tea goes overboard. The revolt is in full swing. New government's coming, because even if civil society must revert to the state of war to rehabilitate itself -- that's what it will do. It's a law of nature.

Now, there's two ways corruption can be recognized -- and these are the two. There's the recognition of actual corruption -- in which the people can no longer avoid the reality of their situation. People start dying. The government covers it up. The media turns, and the people rise. That's what happened with the American Revolution. Impressment of colonists into the British military against their will. The Boston Massacre. Imposition of unfair taxes against the colonists' wills.

Protest, assembly, the press flexed its muscles. Referenda, petitions -- then riots, chaos. Then came the miracle of the American Revolution -- the chaos organized itself. Out of it came some of the most intellectual, well-thought out rebellion human history's ever seen. In a triumph of democratic writing, the people of America came together to produce a document issuing King George a list of grievances, backed by the logic to judge the validity of those grievances.

"He has forbidden his Governors to pass Laws of immediate and pressing importance, unless suspended in their operation till his Assent should be obtained; and when so suspended, he has utterly neglected to attend to them....

He has obstructed the Administration of Justice, by refusing his Assent to Laws for establishing Judiciary powers...

He has erected a multitude of New Offices, and sent hither swarms of Officers to harrass our people, and eat out their substance...

For taking away our Charters, abolishing our most valuable Laws, and altering fundamentally the Forms of our Governments:

For suspending our own Legislatures, and declaring themselves invested with power to legislate for us in all cases whatsoever..."

Thirteen specific grievances spanning the gamut of ethical and systematic corruption, though the emphasis remained squarely on the latter. Taxes were rising, regulations being put into practice that neither seemed necessary nor fair. The power of the legislature at home was ceremonial in comparison to a more powerful one far across the body of water between them.

But think about it -- the revolution that started this country, our country -- it was started by a bunch of sassy expats who didn't want to pay their taxes. I mean -- how dare they! Privy to the extraordinary benefits of the brilliantly linked government/corporate alliance that was the British Empire, the East India Company, and all the rest -- they had no right. None. No right to snub their noses at their monarch, no right to disrespect British tea, or assert that they should have proper representation. They had the glories of the British Empire! What more could they want?

We have to remember, 240 years later, that the Declaration of Independence didn't go uncontested. On October 31st, 1776, King George III responded, and his response was so exquisitely apt - well, look at it for yourself.

"My Lords, and Gentlemen,

Nothing could have afforded Me so much Satisfaction as to have been able to inform you, at the Opening of this Session, that the Troubles, which have so long distracted My Colonies in North America, were at an End; and that My unhappy People, recovered from their Delusion, had delivered themselves from the Oppression of their Leaders, and returned to their Duty. But so daring and desperate is the Spirit of those Leaders, whose Object has always been Dominion and Power, that they have now openly renounced all Allegiance to the Crown, and all political Connection with this Country. They have rejected, with Circumstances of Indignity and Insult, the Means of Conciliation held out to them under the Authority of Our Commission: and have presumed to set up their rebellious Confederacies for Independent States. If their Treason be suffered to take Root, much Mischief must grow from it, to the Safety of My loyal Colonies, to the Commerce of My Kingdoms, and indeed to the present System of all Europe. One great Advantage, however, will be derived from the Object of the Rebels being openly avowed, and clearly understood. We shall have Unanimity at Home, founded in the general Conviction of the Justice and Necessity of Our Measures.

My Lords, and Gentlemen, in this arduous Contest I can have no other Object but to promote the true Interests of all My Subjects. No people ever enjoyed more Happiness, or lived under a milder Government, than those now revolted Provinces: the Improvements in every Art, of which they boast, declare it: their Numbers, their Wealth, their Strength by Sea and Land, which they think sufficient to enable them to make Head against the whole Power of the Mother Country, are irrefragable Proofs of it. My Desire is to restore to them the Blessings of Law and Liberty, equally enjoyed by every British Subject, which they have fatally and desperately exchanged for all the Calamities of War, and the arbitrary Tyranny of their Chiefs."

By modern standards, the American Revolution could be construed as petty. Fought over idealistic principles like subsidiarity, the Americans "hyperbolized" the British government because it undermined the common good, the rule of law and sovereignty of legislators, harassed and made people vulnerable, and made war on the people that were supposedly their own. This wasn't any Syria, though. It wasn't the Arab Spring. It wasn't even France, back when the French were breaking free of their intensely limiting and oppressive tripartite class hierarchy. It wasn't the slave uprising of the Haitian Revolution.

It was a bunch of middle and upper class expatriates from the greatest Empire in the world bothered about high taxes, a lack of adequate representation, "unfair" regulations, and large, distant government interfering in day-to-day life.

Brexit, in other words.

We're all kids at heart.

Deb got the "$ Card" that told her to go stand in the corner facing the wall and skip a turn. The grin on Taylor's face tells you everything you need to know about ONEUPMANSHIP – no mercy, no prisoners, no regrets – pure, unmitigated but hilarious humiliation... 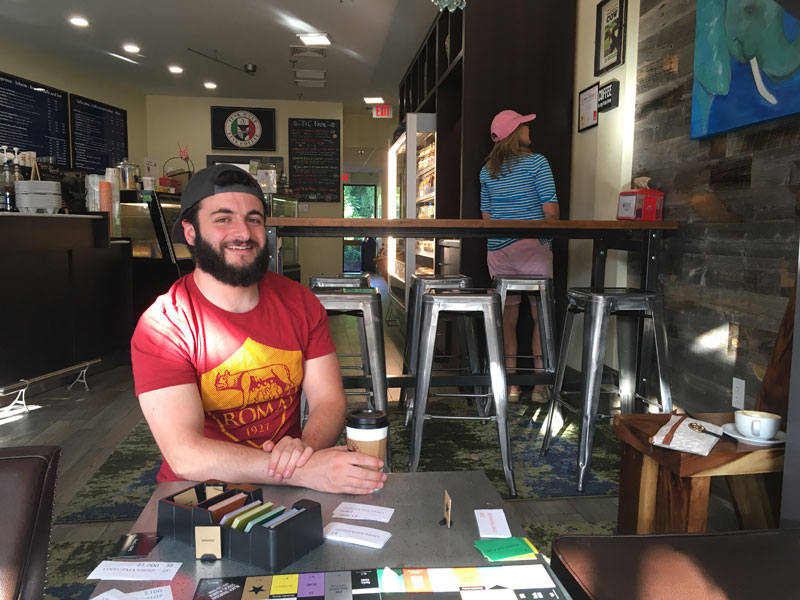 Game nights are still every Wednesday at Tusk & Cup in Wilton 6 - 8 pm, and Thursday nights starting in September at Shearwater Cafe in Fairfield from 7 - 9 pm. Come for the punishment fun.